El Mirador Guatemala. Often when you hear about the great pyramids of the world you think about the Egyptian pyramids or perhaps the Pyramid of the Sun in Mexico. But did you know that Guatemala is actually home to the largest pyramid in the world in terms of volume? ‘La Danta’ Pyramid of El Mirador is located in the Northern Petén region of Guatemala. 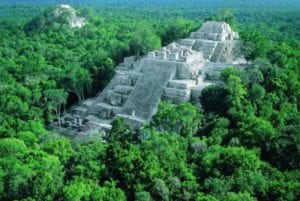 The Lost City of the Mayans – El Mirador

El Mirador in Guatemala is also known as The Lost City of the Mayan. It is largely uncovered and therefore getting there is an adventure in itself. There are no roads. Many take a quick flight from Flores Island while others take the more adventurous route and hike through the jungles of the Mayan Biosphere.

There is no correct way of getting there but if you have the time we would highly suggest this location make it to the top of your Guatemalan bucket list. Join group tours from Flores Island; you have two options: one is join a five day trek through the jungle or the second is helicopter tours to the site.

Pyramid of El Mirador is located in the Northern region of Guatemala. It measures approximately 70 meters (230 feet) tall from the forest floor and its total volume is  2,800,000 cubic meters!. The biggest one in the world in terms of volume.

The city is so vast that it can take days to explore. So, we  advise you to take the trip to El Mirador with the help of a guide or a tour company. The main group of buildings in the city cover a massive two square kilometers, and features three pyramids, El Tigre, Los Monos, and La Danta.

These three towering structures rise hundreds of feet into the sky, and each of them features an ancient temple at their apex. To give you some perspective, the base of the main pyramid is so vast that it would cover 35 football fields. La Danta is in fact the largest structure that has ever been built by the Mayans, and some consider it to be the largest pyramid in existence in terms of volume.