Guatemala and Honduras Trip. The Mayan civilization left a plethora of cultural treasures behind in the mountains and jungles, of which some remain undiscovered. Go on a journey to the most beautiful temples and pyramids and meet the descendants of the once so powerful Mayas of Guatemala and Honduras. Visit four UNESCO World Heritage Sites for humanity. 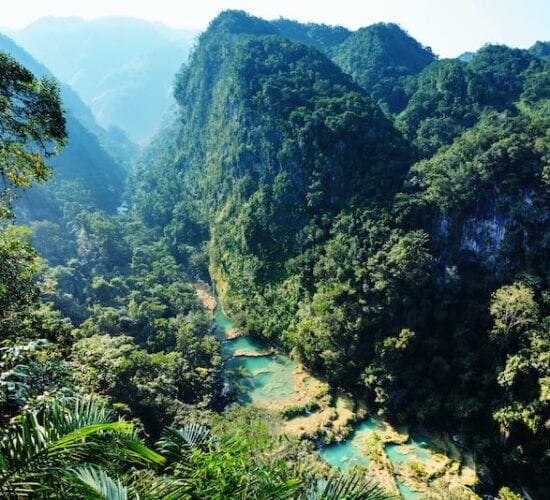 Semuc Champey, Guatemala.View of Semuc Champey from the lookout of amazing this National wonder.

Snorkeling, Honduras.Snorkeling in a jungle river of Honduras.

Upon your arrival you will be transferred to your hotel the town of Copan Ruins.

Day 2. Tour to the Mayan City of Copan.

The archeologists consider Copán to be the cultural center, the Paris, of the Mayan world.

Macaw Mountain Bird Park & Nature Reserve is an innovative tropical bird reserve in western Honduras that cares for rescued and endangered birds of the American tropics. Listen to a parrot talk while it is sitting on your shoulder. Walk into a large flight aviary and feel the rush of wind on your face as many scarlet macaws take flight. Relax viewing decks while flocks of wild parakeets chatter in nearby trees.

This amazing Mayan site is located in the shores of the longest river of Guatemala, it prospered due to its strategic position in the route that connects the Atlantic Ocean with the Mayan lowlands. The central plaza in Quiriguá has one of the biggest dimensions in the whole lowlands. This city is well known for the sculpture that we find there. There are 8 monumental stelae, which were built to commemorate the end of a period and to register other important events. In the afternoon you will go to Rio Dulce where you will have free time to rest.

Today you will take a fantastic boat tour from Rio Dulce to Livingston, where you will visit the Castle of San Felipe de Lara and Paradise Farm.Rio Dulce is found next to the largest Lake in the country, Lake Izabal. Rio Dulce emerges into the Caribbean Sea, and from here you will take a boat tour down to Rio Dulce where you can observe the flora and beautiful locations such as the Hidden River and the Dark Lagoon.

The castle of San Felipe is a Spanish fort located on a peninsula between the Lake Izabal and Rio Dulce. Paradise Farm is a large farm located in Lake Izabal. Here you will find a river of Hot Springs, and also a grand waterfall, the most spectacular aspect of the farm.

Flores is a wonderful place to stay due to its charm and beauty, and also because its location allows you to explore many of the most important Mayan sites in the area. Today you will have free time to explore the island and relax.

Early in the morning you will go by plane to Flores Island. This island is a truly memorable attraction, and the perfect place to rest and relax during your exploration of the numerous cities that form the Mayan empire. It has great views of the beautiful Lake Petén Itzá and great restaurants. From here you will go on a sunset tour to observe the flora and fauna, and another tour to explore the archaeological sites that surround the lake. There is also the famous hospital for animals to which we take you by boat.

Today you will leave early in the morning to the most famous Mayan city of the country, Tikal. The massive ruins of Tikal are concentrated at the center of the Tikal National Park, a carefully preserved area of 222 square miles with many ruins, and some yet to be discovered.

While it is still dark, you will walk through the jungle for about 45 minutes, arriving at the highest temple at the site, Temple IV, in time to watch the spectacular sunrise over the Mayan ruins. As the sunrise reaches its peak, you will hear how the jungle canopy wakes up. Monkeys, birds and other species create a fantastic cacophony of sound, a truly magical experience. Then, you will see the top of the impressive temples rising above the jungle canopy.

It is the third largest Mayan city known in the lowlands of Guatemala. Located to the north of the lagoon by the same name, it contains in excess of 500 structures at its center, including 40 steles, 13 altars, 9 temples and 2 Mesoamerican ball courts. Its position is strategic, as it is located at the center point between the sites of Tikal and Caracol, resulting in competition with the site of Naranjo for control of the area.

This remote site deep in the jungle has the largest pyramid in the entire Mayan world “La Danta”. It measures approximately 70 meters (230ft) tall from the forest floor and, considering its total volume of 2,800,000 cubic meters, it is one of the largest pyramids in the entire world. El Mirador was the grandest city of the pre-classic period and one of the largest in the whole history of the Mayas, with a peak population of perhaps more than a hundred thousand people, judging by the size and extent of the labor pool required to build these massive constructions.

Since El Mirador is an unexplored area, there are no roads or airports close by. So besides trekking to the site the other only way to reach it is by helicopter.

The northeast of El Petén is defined by the river La Pasión and it is the richest zone for inscribed monuments. Due to the importance of this river as a main route of communication between the lowlands and the highlands, we find a numerous sites located in the region.

Ceibal is the grandest of all the cities on the river La Pasión. During the change of the cycle in the Mayan calendar, the king changed many aspects of life from the ways of the previous leaders. He introduced many artistic influences which came from the lowlands in the north and other parts of Mesoamerica, which is why the temples in Ceibal are so very different to other sites.

A very important characteristic of the site Aguateca is the presence of the great crack that divides the city. The defensive character of Aguateca is defined by its proximity to this steep incline of more than 40 meters in height. Studies on the crack indicate that it also had a ritual and ceremonial function.Followed by a jungle trek you will visit the Mayan site of Dos Pilas.

The main temple of Dos Pilas has at its base inscriptions commemorating the life of a particular king, and including detailed information about the conquest of ‘Calakmul’ and the wars against Tikal and other cities of the region.

Semuc Champey is a natural limestone bridge extending 500 meters that rises above the river Cahabón. Here you will find 7 emerald swimming pools ranging from 1 to 3 meters deep, and fed by natural springs from the mountains. This subtropical, humid forest has an array of flora and arboreal canopy. The river river submerges itself at the entrance of Semuc Champey and resurfaces after it passes it.

This is a unique natural formation where you can also find in the water shades ranging from pale green emerald to deep blue sapphire.The underwater caves of have grand rock formations, small waterfalls, deep pools of water, and a river snaking through the whole cave system. This unique tour will have you both hiking and swimming. At the end of the tour inside the caves you will go tubing through the ‘Cahabón’ River.

Antigua Guatemala was declared a National Monument by the Guatemalan government in 1944, a Monument of the Americas by the General Assembly of the Pan American Institute of Geography, and for its immense historical and cultural value, Antigua was designated as a UNESCO World Heritage Site in 1979. Our guide will show you the cathedral, the most beautiful churches and ruins of this city.

Day 15. Transfer to the international airport of Guatemala City.

Unfortunately, today marks the end of your Guatemala and Honduras trip. You can also choose to extend your holiday by combining this tour with one of our other tours. Contact us for more information.

The down over the marvelous Mayan City of Tikal

It will be marvelous to be over the jungle seeing this event. You will not take for granted again the wonder that the daylight brings every single day. Travelers cannot just duplicate this experience and we highly suggest you to take this excursion.

After that, you will spend more time in Tikal with our guide learning about this fascinating civilization and this ancient architecture. Climb some of the temples and discover the flora and fauna. Later, take a nice break, have lunch, watch spider monkeys gaming in the trees, or swim in the crystal clear waters of lake Peten.

You will visit the Seven Altars, a natural park where there are many waterfalls staggered throughout the rainforest. The whole site is set among abundant rainforest, and while it is a beautiful spot year-round, it is best to visit during the wet season, when the creek and waterfalls are running at their heaviest.

Next, you will enjoy one of the best beaches of the entire country, with a relaxing afternoon at the ocean on the white sands of white beach.

An absolutely exclusive opportunity to experience authentic rural Honduras life at this century old plantation. Set in the wonderful western highlands, this family-owned farm offers an insight into the daily life of a working ranch. Go on a cacao, cardamom and coffee plantation excursion, learn about cattle ranching, enjoy delicious home cooked farm meals and round off your experience with a stop in the natural hot springs.

It is a dramatic limestone canyon. While exploring this canyon, you will appreciate views of its huge, 820 feet (250 meter) rock faces. You will go over the river Sauce’ in a small canoe and get a good look at this fabolous canyon. This exquisite, lushly vegetated canyon abutting the tiny Maya village of the same name is worth to see.

Duration: half day. Price per guest from: $40